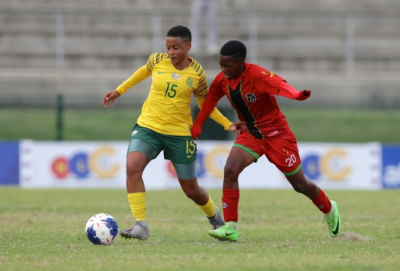 Desiree Ellis made no changes to the side that demolished Malawi in the semi-finals on Thursday.

With just two minutes gone South Africa's Holweni scored the first goal of the match to put her side into an early lead.

Hildah Magaia took her chance at goal in the 37th minute of the match but her attempt hit the side net.

In the second half, Botswana put pressure on Banyana chasing for an equaliser.

But in the 65 minute Salgado extended Banyana’s lead to 2-0  with a fine past after Botswana goalkeeper Maitumelo Bosija could only push Magaia's volley away.

Botswana's Mokgabo Thanda scored a consolation goal for her side in the 86th minute.