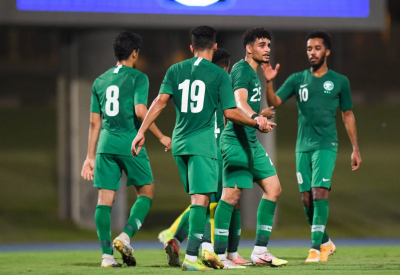 A late goal from Saudi Arabia Under-23’s Ramzi Holan was enough for the home side to steal a win against South Africa in a grueling encounter both sides came highly motivated to win.

Coach David Notoane’s charges were the first ones to put their names on the score sheet through Zakhele Lepasa’ superb finish, following a brilliant assist from fagrie Lakay in the 42nd minute from the far side.

The home side, though, quickly responded with a goal of their own through Ayman Khalifa’s finish to make matters even just before the stroke of halftime.

The second half proved to be a different ball game from the first as both sides played with more aggression and intent of pressing forward in search for goals.

Nasser Oloran converted from the spot kick in the 87th minute following a late challenge by Given Msimango inside the 18-yard box. South Africa, though, quickly responded with a goal of their own with a Lakay finish from a tight angle. Lakay’s goal came a minute later after Saudi Arabia had taken the lead of the match.

However, It was not to be for South Africa on the night, as Holan’s late strike ensured the home side their first win of the scheduled two friendly matches here in Jeddah, Saudi Arabia.

The second friendly match between the two sides will take place at King Abdulaziz Sport City Stadium on 17 November, before the Notoane and his charges fly back to South Africa on the 18th.

Notoane is using both of these friendly matches as part of his preparations for next year’s Tokyo Olympic Games.

SA coach,commended his charges for showing a great fighting spirit in their 3-2 defeat against Saudi Arabia adding that they will bounce back from that performance.

He was speaking in the light of how his charges matched their opponents who had a longer camp to prepare for this fixture, while South Africa had just one training session in Jeddah, leading up to their first friendly match against the hosts.

South Africa arrived in Saudi Arabia on 11 November, where they were held in a two-day quarantine before they could have their first and only training session a day before their first friendly match against the home side.

It is in this that Notoane stated that his charges gave their best fight under the circumstances, and reckons that they will bounce back stronger in their second friendly meeting against Saudi  Arabia.