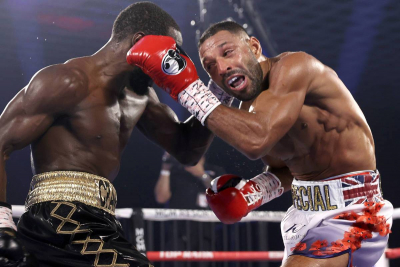 Kell Brook was knocked down then stopped by Terence Crawford inside four rounds of their WBO welterweight title fight in Las Vegas on Saturday night.

A right hook from Crawford sent Brook spiralling into the ropes, before the champion closed the show clinically and quickly by landing a flurry of punches.

Brook was battling for an all-time great British result on foreign shores but, instead, Crawford delivered a demonstration of why he is considered one of the world's pound-for-pound top boxers.

"Never in my career, nobody has ever done that to me in sparring or anything," said Brook.

"I got caught with a shot I didn't see. I'm gutted because nobody could've gotten me in better condition."

Brook had travelled to the US in 2014 to dethrone an undefeated American champion in Shawn Porter for the IBF belt but, six years later, was in Vegas without trainer Dominic Ingle or promoter Eddie Hearn.

In his corner was Spanish trainer Carlos Formento who Brook had met on Instagram.

He also arrived amid questions about the two broken orbital bones suffered in defeats to Gennadiy Golovkin and Crawford's rival Errol Spence Jr.

But the opening three rounds were encouraging for Sheffield's Brook.

He was winning on two of the three judges' scorecards but his hope was eroded in a brutal flash.

Crawford landed a flush right hook from his southpaw stance - only the ropes held Brook up, so the referee ruled a knock-down.

Crawford's finishing instincts then took over and he bludgeoned Brook with further punches until the referee called a halt.

He has now stopped eight consecutive opponents inside the distance, including Brook's rival Amir Khan, and has extended his unbeaten record to 37-0 with 28 KOs.

Spence Jr, the IBF and WBC champion, puts his titles on the line against Danny Garcia next month.

With inputs from SkySports.