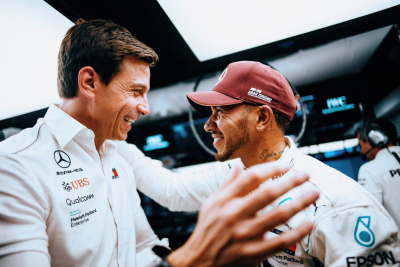 Lewis Hamilton clinched a seventh world championship and became the most successful racing driver in history with a masterful victory in the Turkish Grand Prix.

Victory at a wet and slippery Istanbul Park track in a topsy-turvy race was the 94th of his career.

As he received the congratulations of his team, Hamilton was almost overcome with emotion in the car after the race, saying: "To all the kids out there, dream the impossible."

Incredibly, Hamilton also lapped the only man who could have denied him the title on Sunday - Mercedes team-mate Valtteri Bottas, who endured a torrid afternoon and spun five times.

Racing Point's Lance Stroll had impressively led the first half of the race from his brilliant pole position but saw his hopes of a maiden victory evaporate after a second pit stop and he dropped to ninth place.

Sergio Perez took on the mantle for Racing Point but was overtaken by Hamilton and finished 25 seconds behind the new seven-time champion. The Mexican just held on to second place after a last-lap lunge from Ferrari's Charles Leclerc.

But while Perez held on to second, Leclerc lost his third position to team-mate Sebastian Vettel - who claimed his first podium of a torrid season on a strong afternoon for Ferrari.

Meanwhile Hamilton's contract is due to expire next month,but Mercedes boss Toto Wolff insists the team is not being backed into a corner.

The 35-year-old has also admitted he could quit the sport at the end of this season.

However, contract talks are expected to gather pace once the drivers' championship is secure, and Hamilton is understood to be open to signing a new deal with Mercedes.

And Wolff says it is not a case of the world champion holding all the cards, insisting that Hamilton wants Mercedes as much as they want him.

Tweet
More in this category: « Terence Crawford stops Kell Brook in fourth round of world welterweight title fight. Senegal become first nation to qualify for the 2022 Africa Cup of Nations. »
back to top