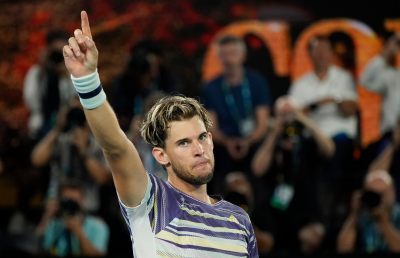 Russian debutant Andrey Rublev earned his first ATP Finals victory in a dead rubber against Austrian third seed Dominic Thiem, who was already assured of his place in the semi-finals.

Tsitsipas and Nadal meet in a straight fight for the other spot from Group London 2020 at 20:00 GMT on Thursday.

Whoever wins between Spanish second seed Nadal and Greece's defending champion Tsitsipas will progress alongside Thiem.

Nadal, 34, is bidding for a first ATP Finals title, while 23-year-old Tsitsipas is aiming to become the first player to win back-to-back singles titles since Novak Djokovic in 2015.

Thiem was beaten by the Greek in the final 12 months ago and showed his intentions of going one step further this year - in the event's farewell to London - with high-quality wins over Tsitsipas and Nadal.

However, the Austrian was unable to find the same level as Rublev, 23, broke serve twice in each set in an attacking performance.

Thiem will find out on Friday if he plays Serbia's world number one Djokovic or Germany's 2018 champion Alexander Zverev in Saturday's semi-finals.