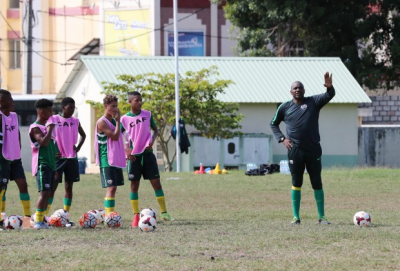 Amajimbos started their COSAFA Cup participation with bang after overcoming Eswatini 2-0 in their opening encounter of the Under-17 boys’ zonal qualifiers currently being hosted in Nelson Mandela Bay.

Thabang Mahlangu slotted home a brilliant header after a well worked cross from Keavanio Francis to put the hosts in the lead on the 38th minute. Amajimbos controlled the tempo of the game and went into the halftime break in the driving seat.

Second half saw Amajimbos being awarded a penalty after Yamkela Phalane was brought down in the box by Ngcamphalala Muzi who also received a caution.

Phalane proceeded to take the penalty and made no mistake as he slotted from the spot to extend the lead for South Africa on the 79th minute.

Coach Vela Khumalo expressed his satisfaction with the result but was disappointed with some of the glaring missed chances.

"We said we wanted to start well but I am concerned that we failed to convert so many chances.  We played in patches which I understand but with time, the fluidity will come in," he said.

"It's a good start and we can only get better from here. We cannot however, get too excited," added Khumalo.

Amajimbos will battle Zimbabwe in the second game on Saturday, 21 November (Kick-off 15:30) streamed live on Cosafa.tv.