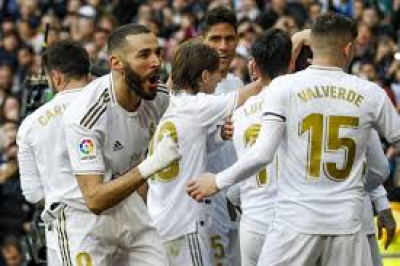 Real Madrid missed the chance to move within a point of La Liga leaders Real Sociedad as they were held to a draw by Villarreal.

However, the visitors struggled to put the game out of reach and visibly tired as the game wore on.

Instead, Villarreal got stronger and were awarded a penalty late on when Samuel Chukwueze was brought down and Gerard Moreno slotted in the spot-kick.

Moreno had a good chance to secure all three points for Villarreal and send Unai Emery's side top of the table but he hesitated when well-placed to shoot and Raphael Varane got the block in.

Despite failing to hold onto their lead, Madrid boss Zinedine Zidane will have been pleased not to have picked up any more injuries ahead of Wednesday's crunch Champions League Group B clash against Inter Milan.

In end it was a good point for Real Madrid, who were missing a number of first-team players through injury, and they stay fourth in the table behind Villarreal in second.

Meanwhile Isco has requested a move away from Real Madrid.

Tired of a complicated relationship with manager Zinedine Zidane and not getting the pitch time opportunities he thinks he deserves, the Málaga-born player has made it known to the club that he would like to leave in the upcoming winter transfer market.

In recent days there have been rumours of him linking back up with James Rodríguez under the management of Carlo Ancelotti at Everton, although the Italian coach was quick to call these reports "nonsense".