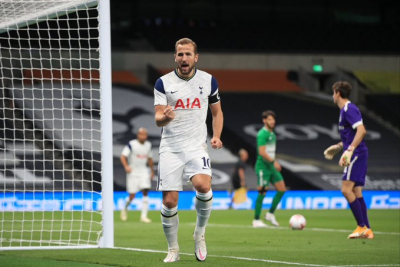 Tottenham Hotspur moved top of the Premier League as Jose Mourinho's side claimed a hard-fought victory over Manchester City.

Spurs had just 33 per cent possession and four shots to City's 22, but once again came away with victory against Pep Guardiola's City in a clinical snatch-and-grab show at the Tottenham Hotspur Stadium.

During a lively opening, Spurs took the lead as Son tucked under Ederson from the edge of the box after Ndombele's chipped pass caught out a high City line (5). It was Spurs' only shot on goal in the first 59 minutes as Mourinho's side soaked up City pressure.

Despite some City pressure either side of the break, Mourinho's approach continued to work as they snatched a second, man-of-the-match Harry Kane turning brilliantly on halfway and feeding Giovani Lo Celso to finish under Ederson again just 35 seconds after coming on (65).

City were ragged thereon as Spurs closed out victory, and the result means Mourinho, celebrating one year at Spurs, sees his side sit atop the Premier League for 24 hours at least.

Spurs are two points above Chelsea and Leicester City, though the Foxes can reclaim top spot with victory over champions Liverpool at Anfield on Sunday.

Defeat leaves City 10th and eight points off the early pace - but with a game in hand.