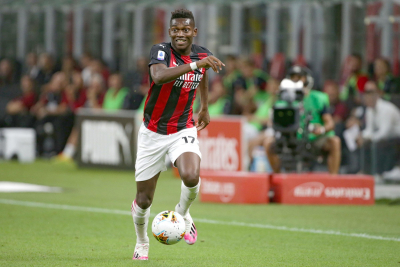 Rafael Leao scored the fastest goal in Serie A history as AC Milan netted after just six seconds of their game at Sassuolo on Sunday.

The Portuguese forward, 21, took Hakan Calhanoglu's pass in his stride to stroke the league leaders ahead virtually from the kick-off.

Leao's goal beat the record of 8.9 seconds set by Piacenza's Paolo Poggi against Fiorentina on 2 December 2001.

Milan were a point clear of city rivals Inter at the top going into the game.

Belgium midfielder Alexis Saelemaekers added a second midway through the first half to double Milan's lead against their sixth-placed hosts.

Shane Long's goal for Southampton against Watford on 23 April 2019 is the fastest strike in Premier League history at 7.69 seconds.

Tweet
More in this category: « CSA announce 25 players for women's national team camp. Benni McCarthy off to a winning start following a win over Chippa United. »
back to top