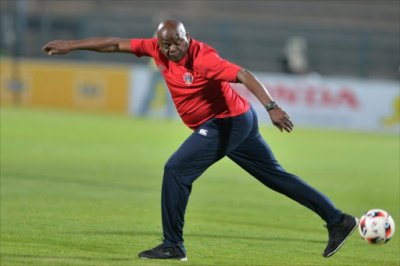 TS Galaxy have fired coach Dan Malesela after just a single win in eight DStv Premiership matches in their debut season, the club confirmed on Sunday.

Galaxy lost 3-2 at Cape Town City this weekend to leave the club on seven points from a possible 24, with Malesela leaving the club for the second time having previously parted ways while they campaigned in the GladAfrica Championship last season.

Zipho Dlangalala has been handed the interim coaching reins going into the festive season break, with the club’s next fixture at home to Baroka FC on January 5.

"The decision to part ways with Coach Dan was not an easy one as he has a rich history with our club. Unfortunately, football is a result driven business and decisions such as this can only be based on results [rather] than history," Galaxy chairman Tim Sukazi said.

"Coach Dan will always be highly regarded at our club and his name will remain well documented in our history books."

Malesela led Galaxy to a shock win in the 2019 Nedbank Cup final, where they defeated Kaizer Chiefs 1-0 in Durban.

TS Galaxy FC has parted ways with coach, Dan Malesela following a string of poor results which saw the club failing to win a match in the last six Dstv Premiership matches.

Malesela re-joined the Rockets at the start of the season having left the club 13th in the GladAfrica Championship log last season.

The club has endured turbulent times under the tutelage of Malesela in the current season having registered one victory, three stalemates and three defeats.
Tweet
More in this category: « McTominay shines as Manchester United put six past leaky Leeds. Karim Benzema stars as Real Madrid move joint-top. »
back to top