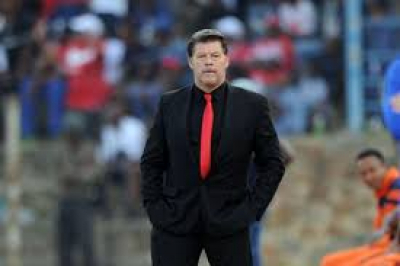 Chippa United have confirmed the appointment of Belgian coach Luc Eymael to replace Lehlohonolo Seema with immediate effect until the end of the 2020-21 season.

Seema has paid the price for a difficult start to the new campaign, which has seen Chippa win just one of their opening eight games in the DStv Premiership.

But his choice of successor could be deemed a controversial one with Eymael having been accused of making racist remarks while in charge of Tanzanian side Young Africans in July, which led to the South African Football Association to state they will "raise objection to any consideration of granting coach Eymael a work permit in South Africa in future".

Eymael has coached in Belgium and in Africa and was also in charge when Free State Stars won the Nedbank Cup in 2018.

He has been jobless since he parted ways with Tanzanian giants Young Africans in July 2020 having allegedly compared club fans to monkeys.

"Our ambition was to have an improved season in comparison to how the team has been fighting relegation in the past few campaigns," Chippa owner Siviwe Mpengesi said.

"One of Mr Eymael responsibilities is a top eight finish for this season. This where the club board can also decide on his longer-term contract with the team.

"We would like to wish Mr Seema well with his future endeavours, and thank him for his contribution towards the Chippa United brand."

Chippa are next in action on January 6 when they travel to SuperSport United.

Mpengesi told Seema in an e-mail sent on Tuesday night his fate would be decided by a board meeting on Wednesday afternoon.