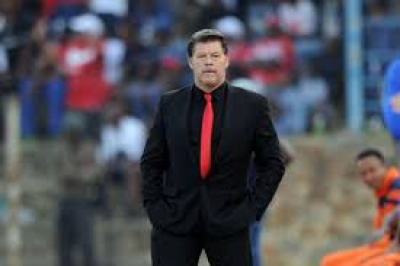 Chippa United have officially confirmed the withdrawal of the appointment of Luc Eymael as their new head coach.

The Chilli Boys yesterday released a statement confirming the appointment of the Belgian coach following the sacking of Lehlohonolo Seema.

The Belgian’s appointment had drawn widespread condemnation from South African Football Association (SAFA) because of his "racist and offensive remarks" made at a previous club.

In July‚ Eymael was fired by Young Africans FC of Tanzania for referring to the club supporters as "monkeys and dogs who know nothing about football".

However, Chippa has confirmed that they will not appoint Eymael as coach or the rest of the season and will announce their new coach in the due course.

Chippa United released the following statement on the matter, which reads as follows:

The Club would like to formally announce that it has withdrawn the appointment of Belgian, Luc Eymael.

When processes are complete, a new coaching announcement will be made in due course.

After having announced Mr. Eymael's appointment until the end of the season on Wednesday, 23 December 2020 - the Club has considered public outrage. There was also the reputational damage caused to our brand; and that of our stakeholders, partners as well as our sponsors.

We would like to clarify that the initial decision to make this appointment was based on Mr. Eymael's coaching track record, where we felt he was the best person to take the Club towards our desired top half finish in this DSTV Premiership season.

Outside of the written reports, there was no formal instruction – to us or to any other team- to not employ Mr. Eymael.

However, as the Pride of Eastern Cape, we represent the legacies of world renowned anti- discrimination heroes that come from our Province.

The Chilli Boys play an influential role to our surrounding communities through football and through our philanthropic work. We have people that look up to us and on the responsible decisions that we take.

Our withdrawal of this appointment is an acknowledgment of our stance on such matters, with the Club also having fully informed Mr. Eymael and his representatives on our position.

As Chippa United Football Club, we would also like to wish our supporters and the football loving public a Merry Christmas and a prosperous New Year.

We also ask all South Africans to continue abiding to the Covid-19 set regulations and restrictions during this festive period.

Tweet
More in this category: « Proteas return to the test arena for the first time in 11 months and seek revenge. Thomas Tuchel sacked by Paris Saint-Germain & Pochettino main contender. »
back to top