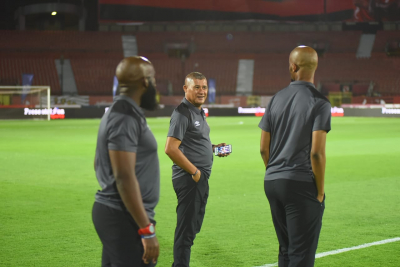 Al Ahly assistant coach, Cavin Johnson, said that he was delighted with his side’s win over AS Sonidep in their opening CAF Champions League game.

The Red Devils were able to beat their Nigerian counterparts with a narrow 1-0 scoreline in the round of 32 thanks to Aliou Dieng’s strike.

Johnson, who is in charge of the team until Pitso Mosimane recovers from COVID-19, said that the win was quite difficult mainly due to the poor conditions. And discussed the importance of giving young players a chance.

"Mosimane isn’t with the team but he was in constant contact with the coaching staff," he said.

"When we return to Cairo and his test results show negative he will be fully in charge of the team once again.

"We knew that the game would be difficult, whether due to the pitch’s poor condition or the weather. And despite having made several changes in the starting 11 and during the game, the team’s performance didn’t change.

"In these types of matches, it’s good to give chances to new players because they play with a lot of energy and it’s also a chance to prepare them for the upcoming important games.

"When we have some unavailable players and replace them with others it gives us several new ideas that we could implement in the future," he concluded.

Al Ahly were set to face Zamalek in the Cairo Derby on Monday but the game was postponed after two cases of coronavirus were found among the Whites’ squad. They will instead face Ittihad of Alexandria.

Meanwhile Mosimane was awarded Most successful Coach in 2020 in Egypt.

Thanks, for the award. Most successful Coach in 2020 in Egypt, it was unexpected taking consideration of the short time spent here . Anyway the winning the treble contributed to the award.
? ? ?.I will gladly receive it. Thanks Al Ahly ?❤️ pic.twitter.com/hmA6gEjJNH

He joined Al Ahly in September just days after leading Mamelodi Sundowns to a domestic treble in SA and left in a shock move to become the African Club of the 20th Century’s first black sub-Saharan coach.

He entered the annals of elite coaches on the African continent to have won two Caf Champions League trophies with different clubs when he led the Egyptians to their first title since 2013 in November.

Mosimane added to his Champions League title won in 2016 with Sundowns.