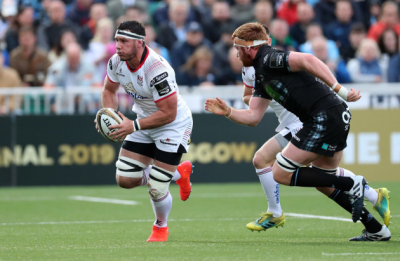 The Springbok loose forward, who missed out on the 2015 and 2019 Rugby World Cups due to injury, is set to be unveiled as a Bulls player on Monday.

Bulls gave their own game away on Christmas Day. Accompanied by a picture of a Springbok player in action against Argentina, the Bulls posted on Twitter: "#BullsFamily24 we have the biggest festive gift for you ...EVER! So big .. So cool... We still trying to package it. Check out our social platforms on Monday at 10h00. Our BIGGEST signing for the year... literally."

#BullsFamily24 we have the biggest festive gift for you ...EVER! So big .. So cool... We still trying to package it ? Check out our social platforms on Monday at 10h00 ? Our BIGGEST signing for the year... literally ? pic.twitter.com/ZySFjWoVGt

A quick investigation found that the picture is of Coetzee carrying the ball against Los Pumas in Durban in 2015.

The 29-year-old is currently at Ulster in Northern Ireland, where he has been a stalwart at No 8 over the past few years after overcoming a few serious injuries, having joined them in 2016.

He signed a three-year contract extension last February, which was supposed to keep him at the club until the 2022 northern hemisphere summer.

But it seems as if the former Sharks flank – who has 30 Test caps – wants to make a last-gasp bid to force his way into the Springbok squad for next year’s British and Irish Lions series, and playing for a South African team will ensure that coach Jacques Nienaber takes note.

Coetzee still has a season to run on his Ulster contract beyond this one, but rumours have been rife over his future.

The Potchefstroom native hasn't made any secret of his Springbok ambitions, which would be boosted by playing his club rugby in South Africa, while Bulls chief Jake White has long been a fan of the abrasive back rower.

Back in November, White cryptically stated that while he hadn't spoken to Coetzee about joining the Bulls, he had been speaking to the Ulster player about how things were going in Belfast, only adding fuel to the fire.

The move - which will see the Bulls buy out the final year of his Ulster deal - will save the province some money as they continue to suffer financially from playing in front of limited fans due to the coronavirus pandemic.

Since joining from Japanese side Honda Heat in 2016, he has made 53 appearances for the province, scoring 14 tries, earning a new three-year deal prior to the 2019/20 campaign.

Tweet
More in this category: « Mikel Arteta says Arsenal's next three fixtures could define their season. Proteas raise their fists before the Boxing Day Test against Sri Lanka. »
back to top