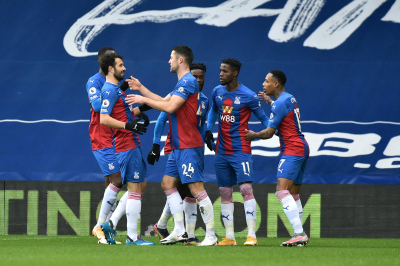 Aston Villa's fine run of form continued as they beat Crystal Palace and kept a clean sheet despite playing for more than 45 minutes with 10 men after Tyrone Mings' sending off.

Villa were already leading when Mings was dismissed by referee Anthony Taylor towards the end of the first half for a foul on Wilfried Zaha - six minutes after both players had been booked for clashing.

In an incident-packed game, Villa claimed an eighth clean sheet of 2020-21 - and moved to within three points of second-placed Leicester City.

Burkina Faso winger Bertrand Traore, who also hit the post, put Villa ahead when he was left unmarked to pounce after Vicente Guaita had beaten away an attempt by Ollie Watkins.

Villa keeper Emiliano Martinez had set the tone for an entertaining match with a fine save to keep out Zaha in the opening minute, while Guaita twice denied Anwar El Ghazi as well as Jack Grealish.

Defender Kortney Hause nodded the second after Watkins had headed against the bar before Dutch winger Anwar El Ghazi lashed home the third with a quality finish.

An emphatic win for 10-man Aston Villa moves them up to sixth#AVLCRY pic.twitter.com/PW4WPDbdxb

Meanwhile Fulham and Southampton played out a goalless draw in a hard-fought Premier League encounter at Craven Cottage.

The result sees Fulham remain 18th in the table while Southampton drop to eighth.