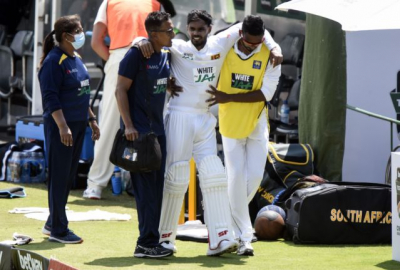 Sri Lanka batsman Dhananjaya de Silva has been ruled out for the remainder of the two-test series in South Africa after suffering a grade two thigh strain, team officials confirmed on Sunday.

De Silva retired hurt during Sri Lanka’s first innings on the opening day of the first test at Centurion Park on Saturday.

His absence will not only weaken the tourists’ top-six batting line-up but also their bowling attack as they will be unable to call on his right-arm off-spin.

The 29-year-old was injured while on 79 as he cruised through for a comfortable single, immediately falling to the ground after completing the run.

De Silva is expected to be out for two weeks but Sri Lanka will hope to have him fit for the home series against England that starts in Galle on Jan. 14.

Sri Lanka closed the opening day on 340 for six, a strong position on a wicket that is providing plenty of assistance to the bowlers.

Rahane, leading India in place of Virat Kohli who has returned home for the birth of his first child, made 104 not out from 200 balls in Melbourne.

Rahane was dropped on 73 and again on 104 on a frustrating day for Australia.

Pat Cummins took two quick wickets in the morning session, having both debutant Shubman Gill (45) and Cheteshwar Pujara (17) caught behind.

India were 64-3 but Rahane battled through conditions in the bowlers' favour, batting patiently before increasing his scoring rate late in the day against the second new ball.

The 32-year-old put on 52 with Hanuma Vihari, 57 with Rishabh Pant and found an excellent partner in all-rounder Jadeja, who ended the day 40 not out.

There has already been enough assistance for both the seamers and spinners to suggest India will be strong favourites should they extend their lead beyond 100 on day three, as they bid to level the four-Test series at 1-1.

Tweet
More in this category: « Manchester City climb to fifth with victory over Newcastle. Al Ahly confirm talks with Mamelodi Sundowns over Sirino's transfer. »
back to top