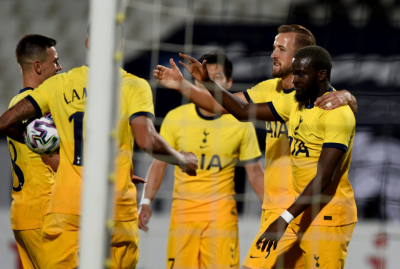 Spurs are now riding a four-game winless streak and miss a chance to go into third place in the Premier League standings. Instead they now sit in fifth place behind Manchester City by one point.

Spurs had taken the lead inside the first minute when Tanguy Ndombele drove in from 25 yards to give the visitors the perfect start.

Wolves grew into the game after that early set back and felt they should have had a penalty in the second half when Eric Dier appeared to catch Fabio Silva's foot inside the area. However, after a check by the video assistant referee, no spot-kick was awarded.

It looked like Tottenham would hang on but Saiss struck with four minutes left to deny Spurs a victory that would have moved them up to third in the Premier League.

The match saw the return of Wolves star Raul Jimenez to Molineux after suffering a fractured skull earlier this month, as the Mexico star took in the action from the stands.

Tweet
More in this category: « Schalke appoint former Spurs boss Gross as new manager. Cheetahs take a bite out of the Sharks, keep Currie Cup hopes alive. »
back to top