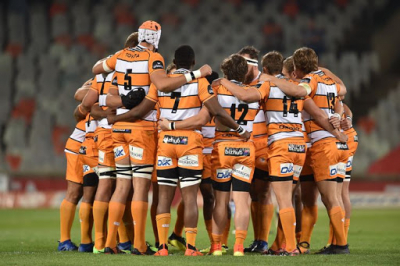 A try off the final move of the game from hard-working prop Boan Venter put the cherry on the Christmas cake for a Toyota Cheetahs team that comprehensively outplayed the Cell C Sharks en route to a 37-10 Carling Currie Cup win at Toyota Stadium in Bloemfontein on Sunday.

With just two rounds of action remaining in the regular season, the Cheetahs have boosted their slender chance of playoff qualification with this unexpected win and welcome bonus-point.

As for the Sharks, they are still likely to make the knockout stage, but the door is rapidly closing on the possibility of them securing a home semi-final.

For the second successive week the Sharks failed to pick up a bonus point at a game at altitude and those who watched both games will consider this performance a cut-and-paste from the one they produced when outplayed by the Xerox Lions the previous week.

In other words, they were once again squeezed out of the game by being thumped in the scrums and dominated at the contact points.

The Cheetahs were fully deserving of this victory. With the exception of a little period of ill-discipline, they were on top of their game in every facet. In particular it was Cheetahs’ dominance at the scrums and breakdowns that led to the Sharks’ undoing.

However, the visitors also have to take some of the blame for their struggles. They had several great transitions in open play, but poor handling and decision-making in the final third of the field cost them dearly.

The Sharks' failure to take advantage of the Cheetahs being reduced to 13 men was a massive morale booster for the Cheetahs during that period.

Indeed, with their scrum a man down they continued to dominate and the Sharks never came close to landing anything like a telling blow. Instead it was Frans Steyn who increased the Cheetahs’ advantage to 20 points with another three pointer.

Tweet
More in this category: « Tottenham score early, concede late in draw to Wolves. Barcelona striker, Lionel Messi wants to play in the US. »
back to top