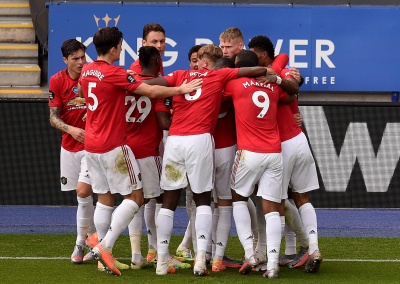 Manchester United striker Marcus Rashford says it would be "stupid" to think about winning the Premier League title at the moment despite his injury-time goal against Wolverhampton Wanderers moving the Red Devils up to second in the table.

Tuesday's game seemed destined to be a draw when Rashford took possession on the edge of the area, near to the goal-line.

But after cutting inside the box, the England man let fly with a left-footed shot that deflected off Romain Saiss to leave Rui Patricio completely wrong-footed.

United are now two points behind leaders Liverpool having played the same number of games, which is as close as they have been to the top of the table at this stage of the season since Sir Alex Ferguson retired.

"We can't look too far ahead," Rashford told Amazon Prime.

"We are a team that is still doing a lot of work on ourselves and to be looking at the table so early on in the season is a bit stupid of us.

"We have to take it one game at a time and if we can keep finding ways to win like this we will see where we are at the end of the season."

Manchester United boss Ole Gunnar Solskjaer said he is not willing to consider talk of a title challenge until after 30 games.

"You can lose the chance of being in the race in the first 10 games of course but play another 15 and get to 30 maybe, then we can start talking about it when we've at least played more than half the season.

"The belief is there - they think 'we can win against anyone, anywhere'. This result is massive for the attitude."

Tweet
More in this category: « Barcelona held by Eibar as Lionel Messi watches from stands. Tottenham-Fulham clash called off amid positive COVID-19 tests. »
back to top