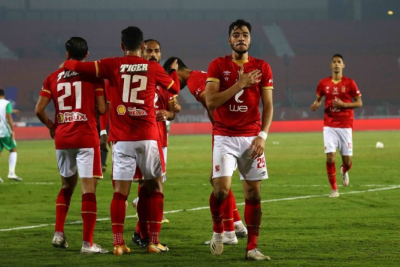 Al Ahly’s director of football Sayed Abdel-Hafiz has confirmed that four players at the club tested positive for COVID-19.

The Red Devils have begun their league title defence this season with a perfect start after picking up three wins from their opening games.

They are set to face 11th-placed Wadi Degla in the Egyptian Premier League’s fourth round on Friday.

And ahead of their clash, Al Ahly have been dealt a huge blow as four key players tested positive for COVID-19, according to Sayed Abdel-Hafiz.

Mahmoud Kahraba, Marwan Mohnsen, Akram Tawfik and Mohamed Hany are all set to miss up to two weeks of action after contracting the virus.

The quartet will now join Amr El-Sulya in isolation as part of the COVID-19 protocol as they add to Al Ahly’s woes.

Abdel-Hafiz also added that Mohamed Magdy Afsha, who has been out of action due to COVID-19, will undergo another PCR test before returning to team training despite announcing his recovery on Tuesday.

Mahmoud Kahraba is currently Al Ahly’s top scorer this season along with Mohamed Sherif, with each scoring three goals in the opening three league games.

Mohamed Hany and Akram Tawfik are also a key part of the Reds’ squad this season, with the latter scoring in their last game against Ittihad of Alexandria.

New signing Beckham is expected to replace Mohamed Hany at right-back, with Hussien El-Shahat, Salah Mohsen, and Walid Soliman among the names to replace the absentee.