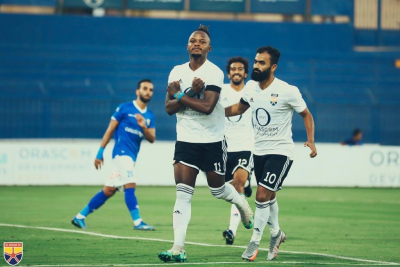 Al Ahly have announced the signing of El-Gouna Zambian forward Walter Bwalya on a four-year deal.

The news came out of nowhere as the Reds announced the signing after failing to sign Mamelodi Sundowns striker Gaston Sirino.

Walter Bwalya has been a revelation since his arrival in Egypt in July 2019 from Nkana FC, scoring 16 goals in 35 appearances for El-Gouna.

Last season, he scored 13 goals in 30 games to help them avoid relegation, before scoring three in five this season as El-Gouna currently sit top of the Premier League.

He becomes Al Ahly’s first winter signing as Pitso Mosimane was keen on signing a new striker ahead of the Club World Cup.

Al Ahly decided to sign Bwalya despite Mohamed Sherif’s impressive performances for the Reds this season, and the return of Salah Mohsen and Ahmed Yasser Rayan from their loan, as well as the presence of Marwan Mohsen.

Walter Bwalya is a red eagle for the next 4️⃣ years ??#BwalyaIsRed pic.twitter.com/VD0tP0KwwZ

Bwalya is a 25-year-old who plays as a striker for El-Gouna for the last season-and-a-half, joining them from Zambian club Nkana FC.

He was linked with moves to both Zamalek and Pyramids FC, but it looks like Al Ahly was the club, who managed to snatch his signature on a four deal.

Bwalya becomes the first Zambian to play for African champions Al Ahly and will hope to re-deliver his fine performances with the Reds.