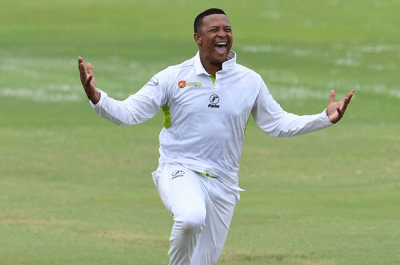 Sri Lanka won the toss and decided to bat in the second and final Test against South Africa at the Wanderers Stadium in Johannesburg on Sunday.

The tourists, hit hard by injuries, made four changes from the side beaten by an innings and 45 runs in the first Test at Centurion.

Batsmen Dhananjaya de Silva and Dinesh Chandimal and fast bowlers Kasun Rajitha and Lahiru Kumara were all injured during the first Test.

They were replaced by Lahiru Thirimanne, Minod Bhanuka, Dushmantha Chameera and Asitha Fernando.

Bhanuka and Fernando were making their Test debuts.

Sri Lanka were again without leading fast bowler Suranga Lakmal, who had not recovered from a hamstring injury.

Sri Lankan captain Dimuth Karunaratne said his depleted side were determined to perform well. "The guys want to give their best," he said.

Karunaratne said his decision to bat first on a green-tinged pitch was influenced by an expectation that the pitch would become more difficult to bat on later in the match.

"The first few days, the pitch is much better to bat on," he said.

De Kock said the message to his team was "a matter of staying ruthless and carrying on with the momentum".

Meanwhile the Proteas did not risk the fitness of lead attack bowler Kagiso Rabada despite a return to their squad and miss out the second test against Sri Lanka.

Rabada suffered an adductor muscle strain that ruled him out of the one day international Series against England last month and left him sidelined for the first test.