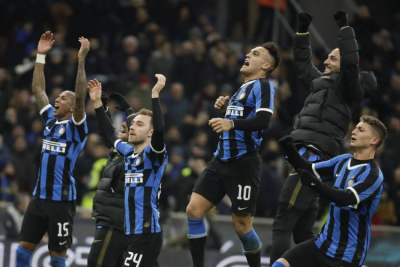 Inter Milan jumped two points ahead of AC Milan at the top of Serie A with an emphatic win, but AC could return to the top later.

Crotone opened the scoring through Niccolo Zanellato after 12 minutes but Lautaro Martinez fired in Inter's equaliser before an own goal from the visitors gave them the lead. Vladimir Golemic converted a penalty for 2-2 at half-time.

A stellar second-half effort with goals from Romelu Lukaku, Martinez and Achraf Hakimi proved too much for Crotone.

But Inter's two-point lead at the top of the table could prove temporary as AC Milan travel to Benevento later on Sunday.

Crotone are second from bottom and, despite an even first half, seemed to run out of steam against Inter's relentless attack.

Lukaku continued his prolific form for Inter as he set up a goal and scored one to take his goal tally for the season to 12, making him Serie A's joint top scorer with Juventus' Cristiano Ronaldo.

Tweet
More in this category: « Sri Lanka win toss, decide to bat in second Test against Proteas. CSA confirms Momentum One-Day Cup will commence on 09 January. »
back to top