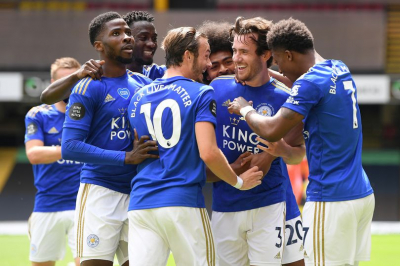 Lecesiter City moved up to third place in the Premier League as second half goals by James Madisson and Youri Tielemans secured a 2-1 victory away at Newcastle United on Sunday.

They moved above Tottenham Hotspur with 32 points from 17 games played, one point behind co-leaders Liverpool and Manchester United, who have played one game less.

Maddison fired in Jamie Vardy's pull-back from just inside the penalty area to break Newcastle's resistance before Tielemans curled home from 20 yards after Marc Albrighton's pass.

Having drawn their past two games, Leicester were in danger of dropping off the pace in the title race, but they showed their class in patches at St James' Park and deserved three points.

Apart from a tidy Vardy finish that was disallowed for offside, they were restricted to very little in the first half, although returning pair Maddison and Tielemans unlocked Newcastle after the break.

Carroll stroked home to put some gloss on the scoreline for Newcastle - his first goal for the club since 2010 - but the hosts saw their winless league run extended to five games.

Tweet
More in this category: « CSA confirms Momentum One-Day Cup will commence on 09 January. Stellar first-half from Man City guides them past Chelsea. »
back to top