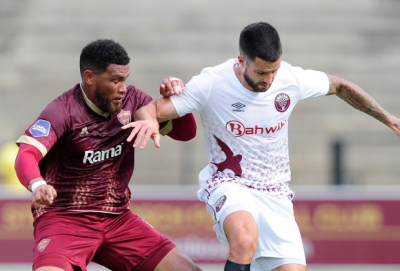 Swallows FC are back level with leaders Mamelodi Sundowns on the DStv Premiership log after defeating Cape Town City 3-2 at the Dobsonville Stadium.

The Birds' brilliant return to the top-flight league continues, with Ruzaigh Gamildien netting two more goals to help his team join â€˜Downs on 21 points at the head of the standings â€“ only goal difference sees the reigning champions ahead of the promoted side.

Gamildien who has now joined Themba Zwane of Sundowns and Bradley Grobler of SuperSport United on the top of Premiership scorerâ€™s chart with seven goals, opened the scoring from the penalty spot in the 38th minute after he was fouled by Tashreeq Morris as he was about to finish a fantastic through pass from Thabo Matlaba on the left flank.

Gamildien soon missed a one-on-one chance â€“ being brilliantly denied by Peter Leeuwenburgh â€“ but he was on hand to score again in the 41st minute, turning home a fine low cross by Kgaogelo Sekgota, who himself had been set free down the left by a brilliant through ball from midfield by Given Thibedi.

Two goals down at the interval, City responded with a change upfront at the start of the second half, replacing Prince Opoku Agyemang with Charles Zulu, while Swallows swapped out the injured Wandisile Letlabika with Junaid Sait.

City were thrown a lifeline when Thabo Matlaba was adjudged to have handled the ball in the box, allowing Mduduzi Mdantsane to net from the penalty spot in the 54th minute and bring the visitors back into the contest.

The Citizens had all the momentum in the second half, which was even more pronounced after Zaphaniah Mbokoma received a second yellow caution (though the referee needed this brought to his attention before issuing the subsequent red card) with just under 20 minutes of regulation time to play, reducing the Birds to 10 men.

The hostsâ€™ best attacking chance would be from set pieces and they duly restored a two-goal lead through Sait in the 76th minute, with the substitute defender scoring a brilliant header from Lebogang Mokoenaâ€™s corner kick.

The sting appeared to be taken out of the game after the hostsâ€™ third goal, but injury time was a dramatic period, with City having Tashreeq Morris sent off and also scoring a second goal through Mdantsane â€“ who went clear at the top of the scoring charts with eight strikes â€“ but ultimately the three points stayed in Soweto.

As for the Citizens, they remain in fourth place (six points off the top) but will be bitterly disappointed at suffering a second league defeat of the season and seeing an end to a five-game unbeaten run.

The teams will return to DStv Premiership action this coming weekend, with City away to Tshakhuma Tsha Madzivhandila on Saturday 9 January and Swallows facing Orlando Pirates away in a Soweto derby the following day.

Twitter
More in this category: « British and Irish Lions' South Africa tour could be held in UK and Ireland as contingency plans considered. Black Caps top Test rankings after 2-0 series sweep. »
back to top