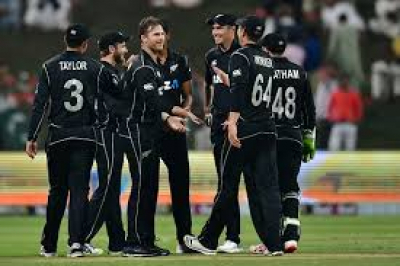 New Zealand rose to the top of the world Test rankings after they thrashed Pakistan by an innings and 176 runs in the second Test to win the series 2-0.

Pakistan, resuming on 8-1, were dismissed for 186 on the fourth day, with Kyle Jamieson taking 6-48.

Pace bowler Jamieson, playing in just his sixth Test, finished with 11 wickets in Christchurch and was the series' leading wicket-taker with 16.

It is the first time New Zealand have topped the Test rankings.

New Zealand have won six consecutive Test matches and have not lost a home Test since March 2017.

Captain Kane Williamson is the world's top-ranked Test batsman while Neil Wagner and Tim Southee are third and fourth in the bowling rankings respectively.

Jamieson, who is 6ft 8ins, made his debut against India in March and has taken 36 wickets at just 13.27, as well as four five-wicket hauls.

"I'm a long way off the cricketer that I want to be," 26-year-old Jamieson, who was named man of the match, said.

"Hopefully I've got another nine or 10 years in this group and if that happens I've got more to come."

New Zealand are third in the World Test Championship table, behind Australia and India.

More in this category: « Newly-promoted Swallows FC continue to show their brilliant start to DSTV premiership. Mourinho one win away from first trophy at Tottenham. »
back to top