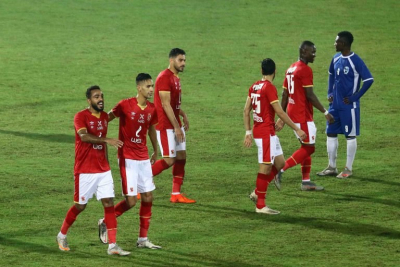 Al Ahly have beaten Niger’s AS Sonidep in the round of 32 of the CAF Champions League to reach the group stages.

Just nine minutes into the game Ahmed Yasser Rayan nearly opened his goalscoring tally with the Reds but his header hit the post.

Three minutes later Walid Soliman made a precise through ball to Taher Mohamed Taher inside the penalty area, whose strike hit the back of the net to give his side the lead.

In the 17th minute, Sonidep goalkeeper Carlos Djourma was sent off after tackling Ahmed Yasser Rayan who was in a clear one on one situation.

Al Ahly continued their dominance throughout the remainder of the first-half and in the 34th minute Mohamed Sherif took a powerful shot from close range but his shot went wide.

Then in the 37th minute, Walid Soliman doubled the scoring after receiving a low cross on the edge of the penalty box which was met with a powerful shot from the veteran forward.

In the 41st minute Taher Mohamed Taher found Hamdi Fathi inside the penalty area but his header went wide.

The second-half started a bit slow with Al Ahly clearly dominating possession but with no clear chances.

Then in the 65th minute they were awarded a penalty after Ahmed Yasser Rayan was tackled inside the penalty area and Moroccos’ Badr Banoun converted it to mark his side’s third goal.

In the 90th minute, Al Ahly put the final nail in the coffin through Mahmoud Kahraba who received Aliou Dieng’s through ball before smashing it into the net.

Al Ahly will discover their groups next Friday January 8th when during CAF Interclub draw.

Twitter
More in this category: « Mourinho one win away from first trophy at Tottenham. Bulls secure top Currie Cup spot after their victory over the Lions. »
back to top