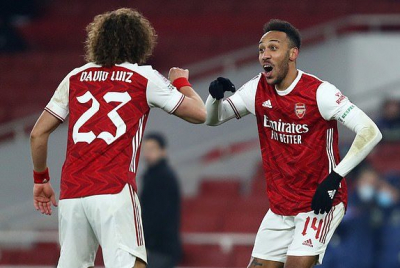 In-form Smith Rowe had an eventful evening after arriving as a second-half substitute, seeing a red card rightly rescinded before opening the scoring.

Aubameyang tapped in the second after a slick move cut Newcastle open.

Andy Carroll missed two golden chances in normal time, which could have sent Arsenal to a rare third-round exit.

The Gunners, who have won the FA Cup on a record 14 occasions, go into the fourth-round draw having being knocked out in the third round just once in the past 25 years.

Meanwhile Scott McTominay's fourth-minute header was enough to give Manchester United an unconvincing victory in their FA Cup third-round tie against Watford on Saturday.

Wearing the captain's armband for the first time in a much-changed side from Wednesday's Carabao Cup semi-final defeat by Manchester City, McTominay found the net after rising to meet Alex Telles' corner.

The hosts did have chances to increase their lead, but Juan Mata failed to find a finish to an excellent three-man move just before half-time, then Daniel James and substitute Marcus Rashford had shots saved after the break.

But none of those opportunities were better than that for Hornets defender Adam Masina, who saw his effort blocked by United keeper Dean Henderson not long after McTominay had struck.