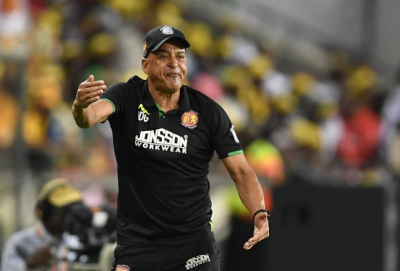 Owen da Gama was on Monday unveiled as the new coach of TS Galaxy with interim coach Zipho Dlangalanga fired after losing 3-0 at home to SuperSport United at the weekend.

The 59-year-old has penned a three year deal with the Rockets, the club announced.

During his two-match spell in charge of Galaxy, Dlangalala registered one point from two matches, a 2-2 draw with Baroka FC and a 3-0 defeat at the hands of SuperSport United.

Da Gama is the third coach this season for Galaxy, who bought Da Gama's old club Highlands Park at the end of last season to move up into the top flight.

"We are delighted in announcing Owen Da Gama as the head coach of TS Galaxy Football Club. Owen is a seasoned coach who has lots of experience in the local game. Most importantly, Owen has a good understanding of the bulk of our current squad after having worked with them at Highlands Park," said Galaxy owner Tim Sukazi.

"As a club, we took the view that we would be best placed with a coach who has experience in the local game as the season is already on the run and there is no time to orientate a coach who has never coached in DSTV Premiership.

"Given where we are in the season, we wanted someone who will hit the ground running from the onset. The fact that coach Owen has worked with most of our current crop of players gave him a notch. Unfortunately there are not too many coaches out there who tick these two critical boxes." Sukazi added.

Da Gama’s first assignment will be against Chippa United on Saturday at Mbombela Stadium.

Tweet
More in this category: « Spurs v Fulham moved to Wednesday after Aston Villa Covid-19 cases. Manchester United to host Liverpool in fourth round of FA Cup. »
back to top