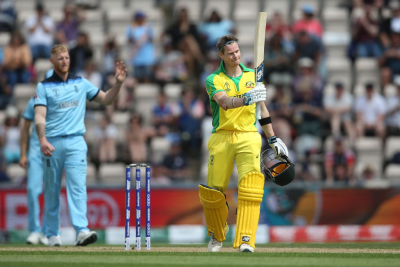 Australia batsman Steve Smith says he is "shocked and disappointed" at suggestions that he deliberately scuffed up the crease during the final day of the third Test against India.

The former captain was seen on the stump camera scraping the crease with his boot during a drinks break.

Smith denied accusations he was deliberately removing the marks used to guide India's batsmen at the crease.

"It's something I do to visualise where we are bowling," Smith told News Corp.

"It's something I do to visualise how the batter is playing our bowlers and then out of habit I always mark centre.

"It's such a shame that this and other events have taken away from what was a great batting performance by India yesterday."

Australia captain Tim Paine had earlier defended Smith, who was heavily criticised on social media, saying he was "certainly not changing a guard".

"I imagine if he was, the India players would have kicked up a bit of a stink at the time," Paine said.

"As we know, he has those many Steve Smith quirks - one of those is he is always marking centre."

India batted out a tense final day to salvage a draw, ensuring the series remained level at 1-1 going into the final Test in Brisbane, which starts on Friday.