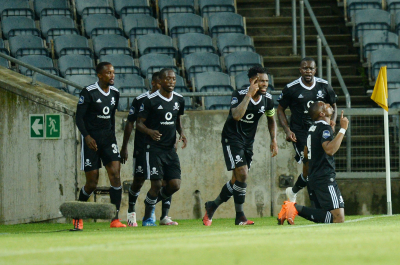 Orlando Pirates returned to winning ways in the 2020-21 DStv Premiership season with a 3-0 victory over Tshakhuma Tsha Madzivhandila at the Thohoyandou Stadium.

The win moved Pirates up to fourth place on the standings, seven points behind league leaders Mamelodi Sundowns.

Defeat leaves TTM in 12th place, a mere three points above the relegation zone and winless in six matches.

Pirates opened the scoring in the 16th minute. Vincent Pule caught Meshack Maphangule on the ball and after Deon Hotto saw his initial effort blocked on the line by Tebogo Thangwane, the Namibian pounced on the rebound, kept his cool and steered the ball into an empty net with Washington Arubi stranded.

The hosts were made to rue that miss seven minutes later as Thembinkosi Lorch teed up Gabadinho Mhango for only his second goal of the campaign.

The Buccaneers put the game to bed in the 64th minute with Lorch the provider once more.

The former Player of the Season rolled the ball into Fortune Makaringe's path and the midfielder drove the ball home with a rasping shot from the edge of the area to seal a comprehensive win.

Meanwhile SuperSport United continued their great form in the DStv Premiership by defeating Bloemfontein Celtic 2-1 at the Lucas Moripe Stadium in Atteridgeville.

United are now just two points adrift of leaders Mamelodi Sundowns ahead of facing them in a crunch Tshwane derby this weekend.

Tweet
More in this category: « Chiefs register their first victory in eight league matches. James Harden reported to be joining Brooklyn Nets as they beat New York Knicks. »
back to top