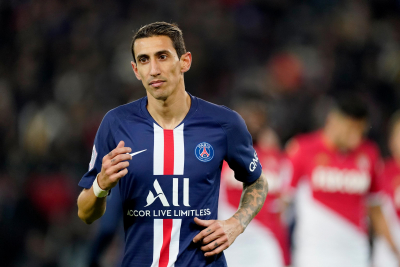 Layvin Kurzawa scored a second-half goal as a lacklustre Paris Saint-Germain moved top of the Ligue 1 table with a 1-0 victory at Angers on Saturday.

Kurzawa volleyed home for his first goal of the season, allowing PSG to move onto 42 points from 20 games, two ahead of Olympique Lyonnais, who host Metz on Sunday.

Lille who host Stade de Reims on Sunday, are third on 39 points.

Olympique de Marseille remained sixth on 32 points from 18 matches after slumping to an embarrassing 2-1 home defeat against third from bottom Nimes as Niclas Eliasson netted a second-half double.

"All due respect to Nimes, we are Olympique de Marseille. We're supposed to be aiming at a Champions League spot and we cannot play that kind of game," said defender Alvaro Gonzalez.

In Angers, PSG were without coach Mauricio Pochettino, who has been isolating since Friday after testing positive for COVID-19.

Angers were the most dangerous side early on while Kylian Mbappe, who has not scored in his last four competitive games, struggled to find his pace and Angel Di Maria was missing in action on a terrible pitch in driving rain.

PSG failed to muster a shot on target in the first half.

The visitors were equally unimpressive after the interval but Kurzawa came to their rescue with a volley from Alessandro Florenzi's cross in the 70th minute.

PSG move two points clear of Lyon, who have a game in hand.

More in this category: « Chelsea's Mason Mount grabs late winner at 10-man Fulham. Leicester go second with 2-0 win over Southampton. »
back to top