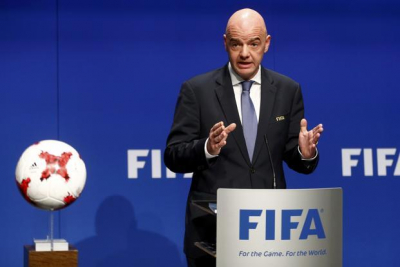 The England full-back was suspended by the Football Association in December, but the ban was provisionally lifted in January after Atletico appealed.

The Spaniards argued the FA could not ban a player not active in its league.

But Fifa backed the decision, ruling "sanctions imposed on the player by the English FA to have worldwide effect".

Trippier's ban, which started on 21 December, will now resume up to and including 28 February.

He will miss the first leg of Atletico's Champions League last-16 tie with Chelsea on 23 February, but could return for the second leg on 17 March.

"The Fifa Appeal Committee has dismissed the appeal lodged by the club Atletico Madrid in a case concerning the player Kieran Trippier," Fifa said.

Trippier told a friend to "lump on" over his 2019 move from Tottenham Hotspur to Atletico, according to the FA.

He was banned and fined £70,000 after being found to have broken betting rules.

Last week, the FA failed to push back the dates of his suspension while Atletico's appeal was considered by football's worldwide governing body.