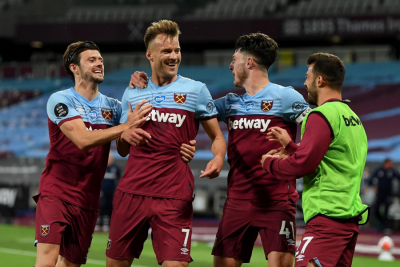 Michail Antonio scored for the second successive game as West Ham edged struggling West Brom to move up to seventh in the Premier League.

The hosts took the lead on the stroke of half-time when Jarrod Bowen chested in Vladimir Coufal's cross.

However, West Brom levelled soon after the restart through Matheus Pereira's thunderous drive from distance.

"We started the season well, 32 points in the league and last season we only finished on 39," Antonio said.

"It's unbelievable to be part of this squad at the moment, the chemistry is so good in the squad this season and we're not playing at our best.

"We're still learning to play with each other but we manage to get wins. Things are looking good but the fact is we've not reached our best yet and we can be better."

From then on, West Ham looked comfortable without threatening to add to their lead as they claimed a third Premier League win in a row.

More in this category: « Barcelona to appeal Messi's two-game ban for red card against Athletic Club in Supercopa. Bayer Leverkusen's Diaby devastating in win over Borussia Dortmund. »
back to top