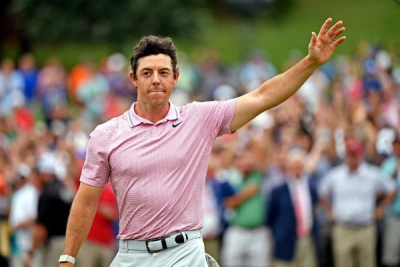 World number nine Tyrrell Hatton opened up a five-shot lead at the Abu Dhabi HSBC Championship before the second round was suspended owing to bad light.

The Englishman will complete his round on Saturday morning having finished the day five under after 13 holes to move to 12 under for the tournament.

First-round leader Rory McIlroy is joint second after being one over through 14 holes of the second day.

Tommy Fleetwood is six under for the tournament following a second-round 67.

Fleetwood was among those to start early on Friday in order to complete their opening round after fading light also saw day one cut short.

Defending champion Lee Westwood is set to make the cut but is well off the lead on three-under for the tournament with four holes of his second round still to play.

Hatton, who trailed McIlroy by two overnight, made an eagle and four birdies to continue his impressive showing - with a bogey at the third his only dropped shot so far.

The Ryder Cup player, 29, said: "I'm obviously in a great position at the moment.

"It was certainly tough out there, so I'm really happy to be five under.

"I held some nice putts and there were a couple of par putts towards the end of my round - nice to hole them and keep a bit of momentum going."

Northern Ireland's McIlroy shot a bogey-free 64 on day one and began the second day in similar form, with two birdies in the first three holes.

However, the 31-year-old's progress was halted with three bogeys and a double bogey that leave him in a four-way tie for second with four holes left to play.

World number six McIlroy is competing in his first European Tour event in 14 months, in a tournament where he has finished second four times.

More in this category: « Zinedine Zidane tests positive for Covid-19 before Alaves game. Sharks confirm its global partnership with Roc Nation. »
back to top