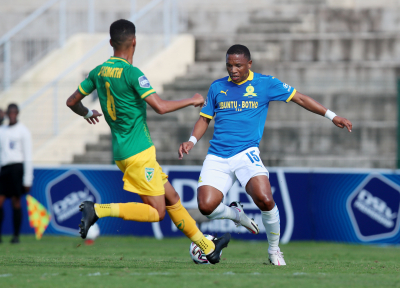 Swallows FC scored a late equaliser to maintain their unbeaten record and claim a 1-1 draw with Mamelodi Sundowns in a DStv Premiership top-of-the-table clash.

Peter Shalulile and Brian Onyango’ absence handed a recall for Gaston Sirino and Hlompho Kekana in Masandawana’s two changes from the goalless draw against Bloemfontein Celtic.

The result leaves the two clubs level on 27 points atop the league standings after 13 rounds of fixtures. Kermit Eramus opened the scoring in Atteridgeville before a dramatic late goal from Musa Nyatama.

The Brazilians took the lead on the stroke of half-time when Erasmus produced a fantastic finish into the top right-hand corner from just outside the box after being played through by Kekana.

Swallows improved after the interval and conjured chances through Ruzaigh Gamildein and Lebohang Mokoena but Denis Onyango remained untested in the Sundowns goal and looked on course to keep a 10th clean sheet of the season.

George Maluleka gave away a free-kick on the edge of the box, for which he was yellow-carded. Kagiso Malinga stepped up and his powerful free-kick was palmed into the path of substitute Nyatama, who headed home for a simple finish.

More in this category: « Vodacom Bulls win against Lions to book their spot in the final of the Currie Cup. Southampton knock holders Arsenal out of FA Cup through Gabriel own goal. »
back to top