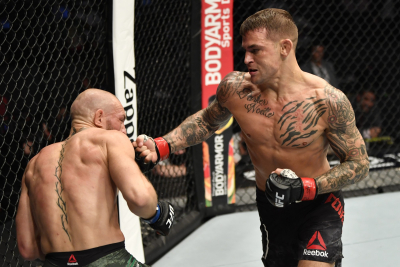 Former two-weight world champion Conor McGregor was left stunned on his return to the UFC as Dustin Poirier claimed victory in their rematch at UFC 257.

McGregor came out of retirement for a third time to face fellow 32-year-old Poirier at Abu Dhabi's Fight Island.

And although the Irishman edged the first round, Poirier unleashed a flurry of punches to seal a technical knockout two minutes 32 seconds into round two.

"I'm gutted, it's a tough one to swallow," said McGregor.

"I felt stronger than him, but his leg kicks were good. I didn't adjust. My leg was badly compromised, I've never experienced those low calf kicks, and I wasn't as comfortable as I needed to be.

"I have no excuses. It was a phenomenal performance by Dustin. I have to dust it off and come back."

Poirier admitted McGregor had won the mind games before they stepped into the octagon for their first clash - a featherweight bout in September 2014 - and the American was stopped inside 106 seconds.

McGregor has been relatively inactive though. Since losing to Khabib Nurmagomedov in 2018, he has had just 40 seconds in the octagon - beating Donald 'Cowboy' Crerrone in style last January.

But McGregor seemed to start well in front of about 2,000 fans at the new 18,000-capacity Etihad Arena. He survived an early takedown and pinned Poirier against the fence for most of the first round, landing a few shoulder strikes like those that did so much damage against Cerrone.

McGregor said before the fight that what motivates him now is building a "highlights reel like a movie", and he tagged Poirier with a couple of right-hand shots. But, unlike their first fight, Poirier was unmoved, replying with a series of leg kicks.

And it was the American southpaw that brought the heat midway through the second round, pouncing on McGregor to take his record to 27-6.

"It was a lot of things, but it wasn't payback. That wasn't the driving force," said Poirier.

"The first time I was a deer in the headlights. This time he was just another fighter that bleeds just like me.

"The goal was to be technical, pick my shots and not brawl at all. Then I had him hurt so I went a little crazy."