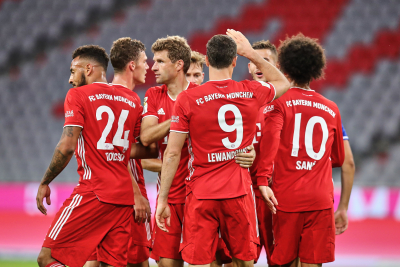 Champions Bayern Munich opened up a seven-point gap at the top of the Bundesliga after dishing out a 4-0 thrashing at bottom club Schalke 04 on Sunday.

Thomas Muller scored with two headers, putting Bayern in front after 33 minutes and netting again in the 88th after the league's top scorer Robert Lewandowski had bagged his 23rd goal of the campaign in the 54th.

David Alaba's long-range effort in the 90th minute capped a comfortable evening for the Bavarians.

With title rivals RB Leipzig, Bayer Leverkusen and Borussia Dortmun all losing on Friday and Saturday, Bayern are firmly on course for a ninth consecutive Bundesliga title.

After 18 games, Bayern have 42 points with second-placed Leipzig on 35, while Leverkusen and Wolfsburg both have 32.

More in this category: « SuperSport United climb to second spot while Arrows suffer first loss. Juve's title defence back on track with a hard-fought win over Bologna. »
back to top