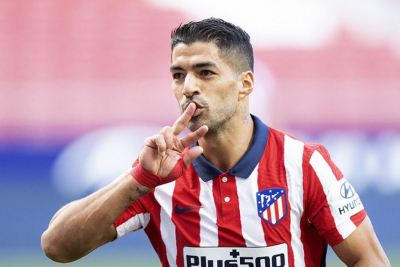 Joao Felix and Luis Suarez combined as Atletico Madrid came from behind to beat Valencia to continue their pursuit of the La Liga title.

Valencia took a shock lead in the 11th minute with a long-range strike from Uros Racic but the league leaders responded when Felix stuck out a foot to prod home from a corner.

Felix then released Suarez for a second after the break.

Substitute Angel Correa added a third to seal a seventh league win in a row.

Atletico now lead nearest challengers Real Madrid, who beat Alaves on Saturday, by seven points with a game in hand.

"It's perfect to play alongside a striker like Luis Suarez. He just keeps scoring goals and he is so important for the team," said Felix.

"We may have fallen behind early but we're a team that keeps fighting until the end. We're doing so well, we just focus on each game and that's what we need to keep doing. We're not looking at how many points we have."

More in this category: « Dominic Calvert-Lewin back on the scoresheet for Toffees. England complete six-wicket win and take series 2-0. »
back to top