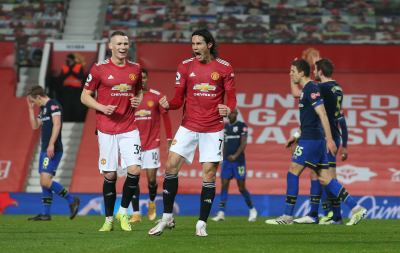 The visitors were forced to play almost the entire game with 10 men after Southampton's Alexandre Jankewitz -- making his first Premier League start -- was shown a straight red card for a studs-up challenge on Scott McTominay just 82 seconds into the match.

Aaron Wan-Bissaka put Man United in front shortly past the quarter-hour, racing on to a Luke Shaw cross and meeting it at the back post to poke home for an early lead.

Man United's third came courtesy of a Southampton own goal, with Jan Bednarek inadvertently poking a whipped-in Rashford cross into his own net in the 34th minute as the hosts continued to dominate proceedings.

Edison Cavani added another goal before half-time to send United into the dressing room with a 4-0 lead.

Substitute Anthony Martial scored from close range as the second half played out and McTominay added United's sixth goal of the night shortly after the Frenchman's strike as the rout was well and truly on.

Bednarek's night got worse as full-time approached when the defender tripped Martial in the area, earning himself a sending off and gifting United a spot kick that Bruno Fernandes converted.

Martial added his second of the night and Daniel James scored in second-half stoppage time to reach the final scoreline.

The result, which ties the largest win in Premier League history, puts Man United level on 44 points with Man City at the top of the table, but Pep Guardiola's leaders are ahead on goal difference and also have two games in hand over their city rivals.

Meanwhile Crystal Palace recorded back-to-back wins in the Premier League for the first time since September as they kept an attack-minded Newcastle at bay at St James' Park.

The Magpies had a handful of chances to add to the second-minute strike from Jonjo Shelvey, while Roy Hodgson's side made the most of their opportunities, turning the match around in a four-minute spell courtesy of goals from Jairo Riedewald and Gary Cahill.

Victory sees Palace move level on 29 points with 12th place Southampton, while Newcastle remain in 16th and eight points above the drop-zone.