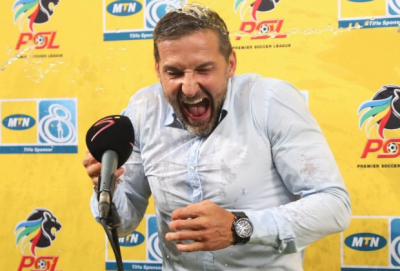 Pule Mmodi scored in one or the other half for Arrows to hand Pirates their third loss in the DStv Premiership this season.

"First-half we were not on the field, we came in the game a little bit but in the final third we could not find the solution. It was frustrating for me and in the second-half we changed the players, we changed the system," Zinnbauer told SuperSport.

"But you don't score, you have the opportunities, a penalty, I think when you get a draw [equaliser] with a penalty then it's a different game.

"But we make a mistake in the defence, then can score and then the game is open. We tried what we can but we lost the game. I think it's deserved for the opponent."

Zinnbauer was asked if too much pressure on Lorch to score the penalty was the reason for him striking his spot-kick over the bar but he insisted it was just a matter of luck not being on their side.

"It's not a pressure for him, he's an experienced player, he scored in the MTN8 the penalty and now it's football, you need luck in this game. We had 20 minutes more, we couldn't score," he said.

"We have some games you don't have the first opportunity to score, you have the penalty and you don't score, that is not enough for us. I'm very disappointed, I'm frustrated.

"If you make a mistake then you get a goal, these players it's not their intention, it's a game you have to win, they fight, they run, they do what they can.

"We lost the game in the first-half, we had opportunities to score, Lorch is a top player, normally he scores but today it was not possible, all the players are frustrated. You saw after the game the heads go down.

"They know they had opportunities, we did not make the best game but we can make a draw or maybe more but now it's important we take our heads up and start again."