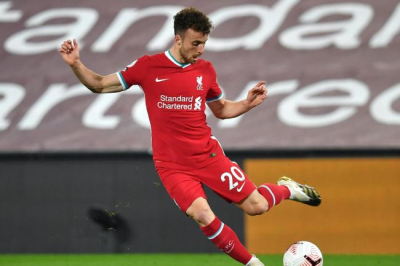 Steven Alzate got a fortuitous but deserved winner for the Seagulls, who are now unbeaten in four league matches.

The Reds, who are seven points behind leaders Manchester City having played a game more, have not won at home since 16 December and have failed to score in three consecutive games at Anfield for the first time since October 1984.

After going 68 games without a league defeat at their home ground, Jurgen Klopp's side have now also lost back-to-back games there.

Dan Burn should have put the visitors ahead in the first half, only to slice over the crossbar, but it was the defender's header across goal that set up the winner.

Nathaniel Phillips could only get a toe to it and the ball deflected off Alzate and beyond stand-in Liverpool goalkeeper Caoimhin Kelleher.

It lifts Brighton to 15th in the table, while Liverpool slip to fourth after Leicester's win over Fulham.

Meanwhile Goals from Gylfi Sigurdsson and Dominic Calvert-Lewin gave Everton a hard-fought win at Leeds United to take the Toffees fifth in the Premier League.

The visitors took a ninth-minute lead when Lucas Digne's excellent low cross from the left flank was steered first time into the net by an unmarked Sigurdsson.

Leeds came close to equalising but Ezgjan Alioski volleyed against the post and Pascal Struijk's header was acrobatically tipped over by Everton goalkeeper Robin Olsen.

England striker Calvert-Lewin then grabbed his 12th Premier League goal of the season with a close-range diving header after Ben Godfrey had flicked on Sigurdsson's left-wing corner.

But Leeds were the better side in the second half and Raphinha pulled one back with a calm finish from Patrick Bamford's pass, although the hosts could not grab an equaliser.

The victory moves the Toffees, who started the day eighth, above Chelsea, Tottenham and West Ham, although the Hammers will regain fifth if they beat Aston Villa in a later game on Wednesday.

Tweet
More in this category: « Jesus, Sterling scores as Man City make it 14 wins in a row. Barcelona overcome upset-minded Granada to reach Copa del Rey semis. »
back to top