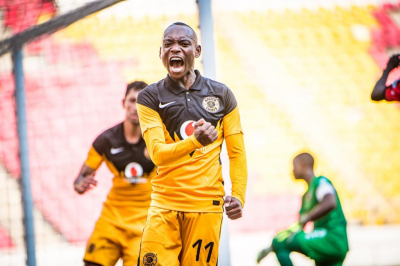 Khama Billiat has started gym exercises and is set for a return to the pitch as the club issued an update on his progress.

The Zimbabwean international's initial prognosis meant he would be out for two months, and a progress update from the club has suggested he is well on course in his recovery.

"Three and half weeks into his injury, Khama has started gym exercises and is now out of the boot," said Chiefs in a statement on social media.

Billiat has been linked with a possible reunion with his former coach Pitso Mosimane at Egyptian giants Al Ahly.

He is now in the last five months of his contract with Chiefs and speculation has begun about his next move.

His former club Mamelodi Sundowns, where he made his name between 2013 and 2018, are also reportedly still interested in a reunion.

Although Billiat has not been able to replicate the form that catapulted him to stardom at Sundowns, Chiefs are also keen to retain his services when his contract runs out on June 30 this year.

Amakhosi do have an option to extend Billiat's stay at Naturena for another 12 months and sources at the club have suggested Chiefs will exercise it.

Three and half weeks into his injury, Khama has started gym exercises and is now out of the boot.

Amakhosi are set to host GladAfrica Championship outfit Richards Bay FC in the Nedbank Cup Last 32 on Sunday (17h00) and have also had Siyabonga Ngezana ruled out of action through suspension.

Coach Gavin Hunt further stated that Ramahlwe Mphahlele continues to struggle in his recovery from a hamstring injury but will undergo a late fitness test 24 hours before the fixture before a decision is made on his return to action.

"Rama is obviously still struggling with his hamstring, so we're going to have to see. We've still got one or two more days. So, we'll see how fit he is come Sunday, or more on Saturday than Sunday," said Hunt in his pre-match press conference.

Amakhosi will face Wydad at the imposing Mohammed V Stadium in the picturesque setting of Casablanca bordering the Atlantic Ocean on Saturday, 13 February with kick-off set at 21:00 local time, which is 22:00 in South Africa.