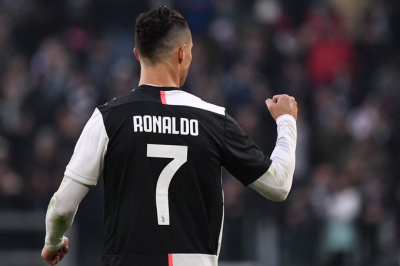 Cristiano Ronaldo scored his 23rd goal of the season as Juventus beat Roma to move ahead of them in the pursuit of Serie A leaders Inter Milan.

Ronaldo ended a run of three games without a goal with a low finish into the bottom corner from 18 yards.

The win was sealed when Roger Ibanez steered a Dejan Kulusevski cross into his own net in the second half.

Reigning champions Juve move above Roma and into third, five points behind Inter and with a game in hand.

It is a sixth consecutive win in all competitions for Andrea Pirlo's team.

Paulo Fonseca's Roma could have taken something from the game had they shown the same cutting edge as their opponent.

However, despite plenty of possession, leading to numerous goalscoring chances, they too often missed the target or gave Juve goalkeeper Wojciech Szczesny too easy a job.

To most strikers, three games without hitting the net is nothing out of the ordinary but for Ronaldo it represents a mini drought, even at the age of 36.

It took him 13 minutes to end that run, using very little backlift but still generating enough power to drive his low shot accurately into the corner from just outside the box after being set up by Alvaro Morata.

He was inches away from a second before the break as his deflected strike from inside the box struck the underside of the bar and bounced down just the wrong side of the goalline.

He was also the man waiting to poke the ball in had Ibanez not got to substitute Kulusevski's cross first for the second goal.

Ronaldo's strike extends his lead at the top of the Serie A scoring charts, taking him to 16 from 17 games, two more than Inter's Romelu Lukaku.

"Sometimes you can play well, sometimes less well. The important thing is to bring home the result," Andrea Pirlo said. "I don't know if it was the best Juve tonight, but it was a great Juve."

Earlier, Atalanta let slip a three-goal lead after 20 minutes and were held 3-3 by Torino.

Josip Ilicic, Robin Gosens and Luis Muriel put the Bergamo side in control at home.

But Torino captain Andrea Belotti pulled a goal back three minutes before the break sending in the rebound after missing a penalty with Bremer getting a second in first-half added time.

Federico Bonazzoli headed in the equaliser six minutes from time.

It was a third draw in three games for new Torino coach Davide Nicola with the club 17th just above the relegation zone.