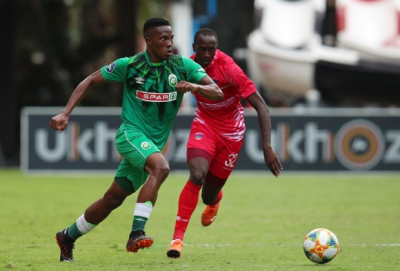 As a result, Usuthu advanced to the Last 16 after winning an entertaining KwaZulu-Natal Derby match, while Abafana Bes'thende crashed out of the competition.

The chances came thick and fast inside the opening 13 minutes of the game with AmaZulu midfielder Xola Mlambo missing the target after being sent through on goal.

At the other hand, Michael Gumede hit the side-netting after being set-up by his strike partner Knox Mutizwa as Arrows looked to break the deadlock.

The opening goal came in the 14th minute when Mutizwa's pass found Gumede, who fired past AmaZulu goalkeeper Siyabonga Mbatha to make it 1-0 to Arrows.

The hosts were then able to contain AmaZulu and Arrows were leading 1-0 at the interval.

AmaZulu did grab a late goal in stoppage time when Luvuyo Memela's delightful cross was turned home by Majoro to make it 1-1 and the game ended in a draw in regulation time and extra-time followed.

Arrows midfielder Ntsako Makhubela was sent-off in extra-time after receiving his second yellow card, but the hosts were able to contain AmaZulu and ultimately, the game ended in a draw and a penalty shootout followed.

AmaZulu went on to win 5-4 on penalties as they converted all five of the penalty kicks with Memela scoring the last one to send Usuthu to the Last 16.

The win saw the Citizens book their place in the Round of 16, while Phunya Sele Sele bowed out of the lucrative tournament.

Elsewhere TS Sporting defeated Mpumalanga rivals TS Galaxy 5-4 on penalties (0-0 after extra-time) to book their spot in the last-16 of the Nedbank Cup at Emirates Airline Park (Ellis Park) on Saturday afternoon.

Tweet
More in this category: « Varane brace seals important Real Madrid victory at Huesca. Dortmund slip up 2-1 in Freiburg to continue rollercoaster season. »
back to top