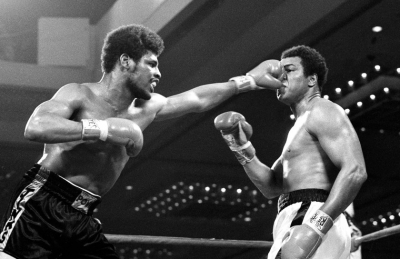 Leon Spinks flattens the nose of heavyweight champion Muhammad Ali with a left jab during their 1978 title fight at Las Vegas.
(Associated Press)

The American achieved a famous upset win over Muhammad Ali in 1978, in just his eighth professional fight.

He had suffered with health issues in his later years and was diagnosed with advanced stage prostate cancer in 2019.

"His final fight was fought with the same skill, grace and grit that had carried him through so many lifetime challenges," said a statement from his management company.

The former US marine died on Friday evening in Henderson, Nevada, with his wife Brenda Glur Spinks by his side.

Born in St Louis, Spinks won gold at the 1976 Olympics in Montreal, then rose to greater prominence a little more than 18 months later, given the nod via a split decision to stun Ali and claim the WBC, WBA and lineal heavyweight titles.

His reign as world champion lasted exactly seven months as a sharper and fitter Ali gained revenge in a rematch in September 1978, becoming the first three-time lineal heavyweight champion after a comfortable points win.

Spinks did get another opportunity for heavyweight glory in June 1981, but was stopped inside three rounds by Larry Holmes.

Spinks then dropped down to cruiserweight but was defeated by WBA champion Dwight Muhammad Qawi in 1986. He boxed on for another nine years and finished with a record of 26 wins, 17 defeats and three draws.

Known for his gap-toothed grin, Spinks's battles in the ring contributed to his ill health in later life. It was found he had shrinkage in the brain in 2012 before his cancer diagnosis was confirmed a few years later.

His son Cory, 42, is a former undisputed welterweight champion who also won a world title in the light-middleweight division.

Spinks' younger brother Michael, 64, was undisputed light-heavyweight champion for a period in the 1980s, before moving up to heavyweight, where he won the IBF title and avenged Leon's loss to Holmes.