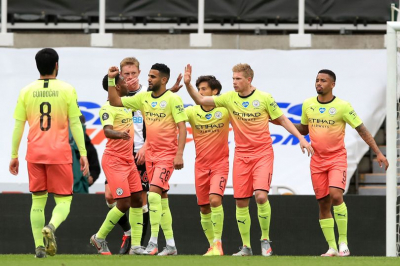 Manchester City extended their lead at the top of the table to five points after Alisson made two blunders in a 4-1 victory at Liverpool on Sunday.

Ilkay Gundogan grabbed himself a brace while Raheem Sterling and Phil Foden also scored in a big win for Pep Guardiola's side.

Mohamed Salah scored a penalty to make it 1-1 but Jurgen Klopp's side are now 10 points behind City having played a game more.

Gundogan had an eventful afternoon after missing a penalty in the first half.

Both teams started the match slowly but it was Liverpool who had the first chance after 25 minutes when Sadio Mane headed over from close range.

Roberto Firmino also came close but his volley from outside of the area was tipped over the bar by Alison.

With 10 minutes to go before the break, City were awarded a penalty when Fabinho brought down Raheem Sterling in the box but Gundogan blazed it over the bar.

Gundogan made up for his miss by putting the visitors ahead after 49 minutes when he reacted quickest to Alisson's save from Foden's strike.

Liverpool were awarded a penalty just after the hour mark when Ruben Diaz pulled down Salah in the box and the Egypt international converted from the spot.

City went ahead 10 minutes later when Foden capitalized on Alisson's mistake to set up Gundogan for his second.

The Liverpool goalkeeper made another massive error as his stray pass went straight to Bernardo Silva who set up Sterling before Foden scored a fourth moments later.

Meanwhile Leicester City's outside hopes of winning the Premier League title suffered a blow after being held to a goalless draw at Midlands rivals Wolves.

Nuno Espirito Santo's side defeated Arsenal last time out but have now won just once in 10 league games and remain 14th in the table.

Both sides are in FA Cup fifth-round action during the week. Leicester are at home to Brighton on Wednesday (19:30 GMT), before Wolves host Southampton on Thursday (17:30).