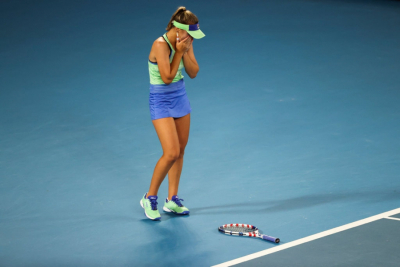 Defending champion Sofia Kenin made a nervous start to her Australian Open defence, while former winner Victoria Azarenka was knocked out after seeming to struggle with her breathing.

American Kenin was in tears before a 7-5 6-4 win over Australian wildcard Maddison Inglis.

Meanwhile, Azarenka needed an inhaler in a 7-5 6-4 defeat by Jessica Pegula.

The Belarusian, who won the title in 2012 and 2013 and was a US Open finalist in September, was one of the 72 players who went through a 'hard' quarantine after arriving in Australia where she was confined to a hotel room for 14 days.

The 12th seed had played only one match since coming out of quarantine, having pulled out of a warm-up event last week with a lower-back issue.

She made a good start, racing to a 5-2 lead, before losing five games in a row and needing two medical timeouts in the second set as she looked uncomfortable and flushed.

Azarenka declined to discuss the medical issue after the match but said of her build-up: "Was that the best preparation for me? No.

"The biggest impact for me personally has been not being able to have fresh air. That really took a toll.

Kenin found it hard for different reasons, frequently struggling to keep a lid on her emotions against world number 133 Inglis as she seemed closed to tears at various points in the match.

She was broken twice in the first set to trail 3-1 before recovering and she later double-faulted on match point before making it over the line.

She admits to getting nervous before all her matches but said that having a title to defend had made it worse.

"I have to try to put my emotions aside for a match," added Kenin, who faces Estonia's Kaia Kanepi next.

"I have to somehow get better at that if I want to do well here."

Kenin is joined in the next round by Garbine Muguruza, whom she beat in last year's final, after the Spaniard's comfortable 6-4 6-0 win over Margarita Gasparyan, while 11th seed Belinda Bencic and former semi-finalist Elise Mertens also advanced.

American 16-year-old Coco Gauff, who had a stunning run to the fourth round here last year, won her opener against Jil Teichmann 6-3 6-2 to set up a meeting with Ukrainian fifth seed Elina Svitolina, who beat Marie Bouzkova 6-3 7-6 (7-5).