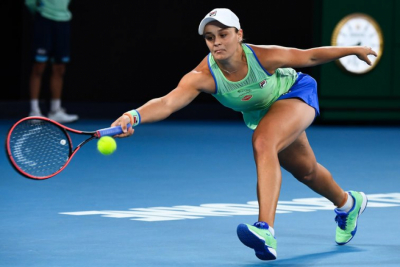 World number one Ashleigh Barty took just 44 minutes and did not drop a game as she ended a year-long wait for Grand Slam tennis with a stunning win.

Defending champion Sofia Kenin, however, made a nervous start and was in tears before a 7-5 6-4 win over Australian wildcard Maddison Inglis.

The Belarusian, who won the title in 2012 and 2013 and was a US Open finalist in September, seemed to struggle with her breathing and needed an inhaler in a 7-5 6-4 defeat by Jessica Pegula.

Barty and Kenin are joined in the next round by Garbine Muguruza, last year's beaten finalist, after the Spaniard's comfortable 6-4 6-0 win over Margarita Gasparyan, while 11th seed Belinda Bencic and former semi-finalist Elise Mertens also advanced.

American 16-year-old Coco Gauff, who had a stunning run to the fourth round here last year, won her opener against Jil Teichmann 6-3 6-2 to set up a meeting with Ukrainian fifth seed Elina Svitolina, who beat Marie Bouzkova 6-3 7-6 (7-5).