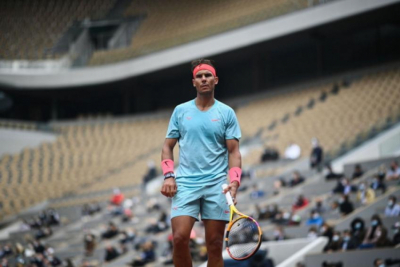 The Spaniard did not play in the ATP Cup last week after struggling with a back injury, but he moved well in a 6-3 6-4 6-1 victory over the Serb.

He will play American world number 177 Michael Mmoh in the second round.

Fifth seed Stefanos Tsitsipas cruised through against Gilles Simon, seeing off the 36-year-old Frenchman 6-1 6-2 6-1 in one hour 32 minutes.

Nadal, who reached the final in Melbourne in 2019, did not have to exert himself too much in his win over Djere.

His only troubles came when serving for the set - he was broken to love at 5-2 in the first and was forced to stave off break point at 5-4 in the second.

Greece's Tsitsipas had the Rod Laver Arena crowd laughing - and jokingly booing - following his quick victory over Simon when he said: "I wasn't expecting it to come so easy."

The 22-year-old added: "I feel like I messed it up already. I think I played a spectacular match from the beginning to the end.

"That was the last thing I was expecting, playing on Rod Laver and everyone laughing at me!"

Meanwhile, Medvedev extended his winning streak to 15 matches with a 6-2 6-2 6-4 win over Canada's Vasek Pospisil.